It is generally considered that safe and consistent results are best achieved when shooting with both eyes open.
Sadly, even if the test for cross eye dominance on the previous page shows that you have a 'correct' master eye there is still a strong possibility that your sight pictures and hence your hit rate will be affected by 'Middle' vision. (This term is also known as 'central' or 'shallow vision').

To test for ‘Middle’ vision you need the assistance of a second person:

Step 1:
The assistant stands about 4 feet away facing you with one eye completely covered by their hand.

Step 2:
You take the Easy Hit eyesight tester card or a CD in your 'trigger' finger and thumb. Hold the CD at arms length at waist height directly in front of you.

Step 3:
You raise the CD slowly at arms length straight up the centre of your body and view the visible eye of your assistant through the hole. Repeat the test three times and on the third raising keep the CD raised so you can still see their eye in the centre of the hole.

Step 4:
The assistant looks through the hole and tells you what they see. As they have perfect eye dominance (they are only using one eye), they will see the effect of middle vision and where your gun is really pointing.
They will be seeing images similar to those shown in the 3 pictures to the right.

Eye dominance may be affected on a day to day basis for a variety of reasons e.g. approaching puberty or middle age, the effects of de-hydration, reducing sugar levels and food intake or during monthly cycles.

The Easy Hit Bead is guaranteed to eliminate the fluctuations of all degrees of middle vision and cross eye dominance, naturally, safely and instantly. 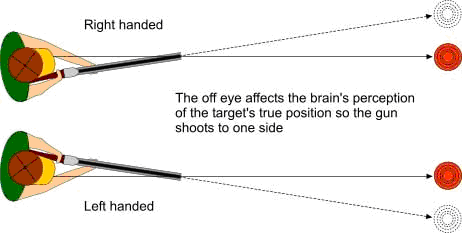 We have a new website
Welcome to our new website. We hope you can easily navigate the new site and find out about the fantastic advantages to the Easyhit! bead and why it will help your shooti...

Come and see us at the following events: